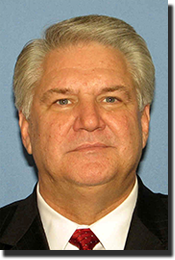 Mr. Beauchamp is a Lawton native. He is a product of Lawton Public Schools, and he has obtained degrees from Cameron University, Southwestern Oklahoma State University and the University of Oklahoma. He joined the Lawton Public Schools staff 39 years ago as a math teacher and coach. He has served on the Oklahoma Commission for Teacher Preparation, the Education Advisory Council for Congressman JC Watts, the Governor’s Task Force for the Prevention of Teenage Pregnancy and the Governor’s Task Force on Creating Administrative Efficiencies. He currently serves on the Board of Directors for Great Expectations and the National Association of Federally Impacted Schools where he is the past president. He also serves on the OETA Foundation Board of Directors. He was named Administrator of the Year in 2005 by the Oklahoma School Public Relations Association, and in 2010, he received the Legends of Crossroads Award from Crossroads Youth and Family Services for his work with early childhood education. In June 2013 Mr. Beauchamp retired as the Superintendent of Schools in Lawton, a position he has held for the last 13 years.