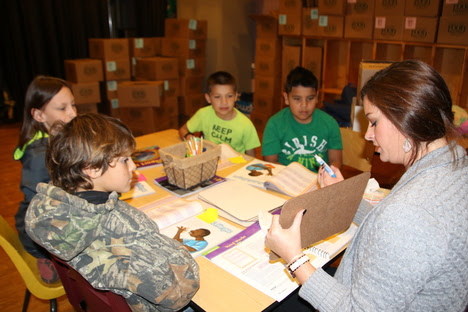 HOLDENVILLE (April 12, 2017)  – In a cramped space behind the stage of Reed Elementary in Holdenville, school secretary Diane McCoy and four students discuss the whys of the letter Y. Her many tasks in the office are on hold while she attends to more important business: boosting kids’ reading skills in a targeted intervention program that has helped propel the school’s report card from a D to an A+.

The scene is much the same across the school for a half-hour block, four mornings a week. Students leave their classrooms to join small groups strategically placed in every pocket of the school. Nearly every adult on staff huddles with a group of kids during the Walk to Read program.

“At 10 o’clock, the school shuts down, and everybody walks. Everybody gets up and moves,” principal Danielle Patterson said. 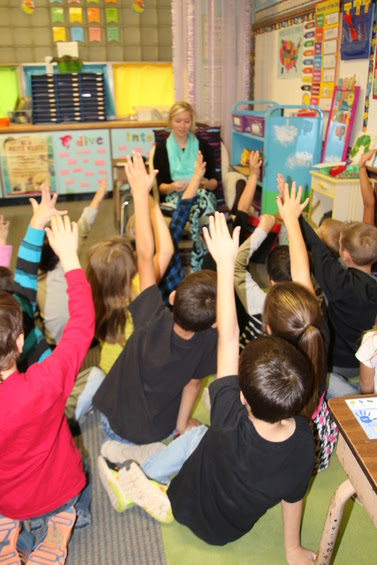 The goal is to identify which reading skills each individual child lacks, group those children together regardless of grade or class and hit those skills intensively during intervention. By utilizing as many adults in the building as possible and making it a schoolwide exercise, teachers keep the low-achieving groups small and attack dozens of different deficiencies simultaneously.

“We’re pulling in the secretary and the nurse since we’ve had less staff than we’ve ever had,” Patterson said. “Everyone has to buy in to make it work. The first year was very, very hard, but now it’s just part of who we are.”

Patterson, who calls the shift in school culture a “total systems change,” uses scripts and flash cards in the Voyager Passport reading curriculum, purchased with a grant from the Oklahoma State Department of Education, to guide her building’s noneducators through the lessons. Reed Elementary is a Great Expectations Model School. Patterson said Great Expectations has been instrumental for team building among the staff. 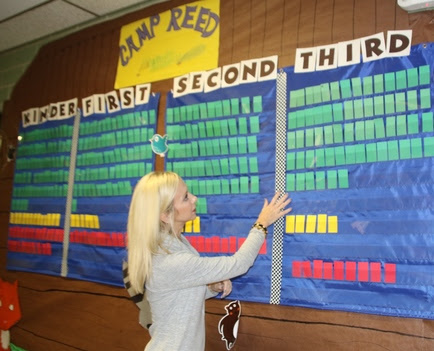 Teacher Danny Sipes said the Walk to Read program has made a huge difference for his third-graders.

“It’s absolutely amazing. We were able to get some of our kids who were projected not to pass the third-grade reading test to pass it proficiently,” Sipes said. “It gives them more one-on-one time and lets them open up and ask questions that they normally wouldn’t in the classroom setting.”

As Sipes and his students read a story about gymnast Dominique Dawes, third-grader Alexander Coyers noted some similarities between the U.S. gymnastics team and his small reading group.

“She’s on a team. Her team won medals. She started when she was 6 years old. I started reading when I was 4,” he said. “Reading in groups makes you smarter. You get to talk about other stuff you don’t know. We get to read it all together, and sometimes we get to go back and read it again.”

At the same time students in Holdenville are reading across their school, a similar scene is playing out less than nine miles away at Wewoka Elementary. Children dance through the hallways as they make their way to their reading intervention groups while a Katy Perry song blasts through the intercom. The Wewoka Tigers’ program, ROAR, resembles Holdenville’s in that students venture beyond their classrooms to small reading groups schoolwide. 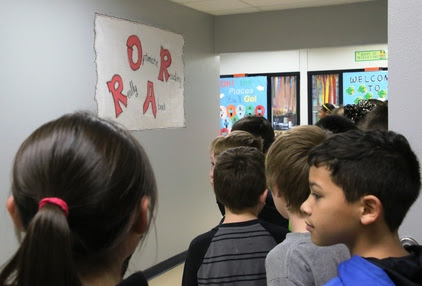 “We are able to get a lot more skills covered in 45 minutes per day when we do it schoolwide because instead of just using two or three teachers to cover two to four skills, we can cover 21 skills,” said Slovacek, who reassesses all 338 students every three weeks and rotates them to new groups as they master each skill.

Principal Pat Hensley calls her program a true community effort. She uses self-guided intervention packets from The 95% Group, paid for with donations from local businesses and organizations. In addition, she’s not afraid to ask community members to continue to pitch in by leading some of her reading groups.

“This has helped build school community. With all the teachers, extra resource people, all the students, even the community and the parents, it’s just a wonderful collaboration where everybody has this vision of progress. You’ve got all these stakeholders who are so attuned to what we’re doing. They believe in it,” Hensley said. 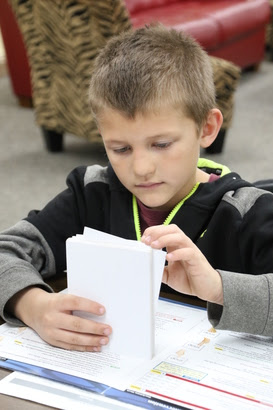 Hensley called in her sister Anita Chronister to work with an intervention group in the library on a day when several teachers were out sick. Chronister had some special education classes in college but had never led one of Wewoka’s reading groups before.

“The kids and I are learning together. The instructions were great. I got here about 15 minutes prior and read over the material,” said Chronister, who worked with the children on consonant blends.

Hensley rotates her teachers through the intervention groups as well so they can gain experience teaching different reading skills. Back in Holdenville, third-grade teacher Brianna Sanford said targeted testing and using assessments as tools to customize instruction have enabled her to meet her students’ needs and are making her a better teacher.

“They always say, ‘Do intervention. You need to do intervention.’ But as a new teacher, I didn’t know what kind of intervention to give. What do they need? What am I not doing for them?”

Sanford said she further reinforces the small-group morning lessons by repeating the same themes and vocabulary words in her classroom throughout the day.

Children who are strong students are strong readers, said Danielle Calvin, director of elementary English language arts at the Oklahoma State Department of Education (OSDE). She said reading strategies like the ones in Holdenville and Wewoka allow schools to be more intentional about addressing any holes in instruction. 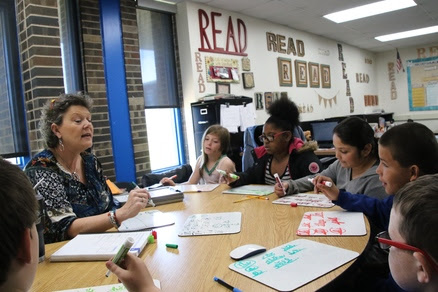 “It’s hard to move forward when those gaps have not been filled,” Calvin said. “That’s when kids get frustrated. They give up, and we have a whole bunch of bigger issues that come in, like behavior problems and dropping out. Reading is such a key part of self-esteem and growing.”

Sharon Morgan, OSDE’s director of early childhood, visited Holdenville’s Walk to Read program and was impressed with how teachers are uniting to build a culture around reading.

“The students believe in themselves. They’re excited about what they’re learning. The teachers believe in what they’re doing. Parents know this is being done to target their child’s specific needs. That makes all the difference,” Morgan said.

Holdenville’s McCoy has noticed a dramatic change in students’ confidence.

“At the beginning of the year, one student wouldn’t answer a lot of questions. He was a little unsure of himself. But as we went on, he got those basic phonics skills and started answering questions,” McCoy said. “It’s like a building system. You start with something small, then build on those phonics skills.”

Collecting and analyzing the data to construct and rotate Wewoka’s reading groups has become a full-time job for Slovacek, but she said the rewards are worth it.

“I absolutely love when a child is in front of me and I see such huge gains, especially a younger child who couldn’t hear letter sounds. It’s amazing the progress we’re seeing,” Slovacek said. “The kids are so excited. They’ll come in and say, ‘I’m going to benchmark today!’ or ‘I’ve got this! Where do I get to go next?’”

Annette Price is communications and constituent services specialist at the Oklahoma State Department of Education.

PHOTOS: Reed Elementary secretary Diane McCoy works with third-graders Jayden Bridges, Trinity Kerby, Derek Castillo and Jaylen Alexander in a storage area behind the stage at the school. Teachers pause their morning classes to participate in a reading intervention program called Walk to Read, which has caused test scores to soar.

Principal Danielle Patterson shows how the staff tracks the reading gains students have made with the data wall in the main hallway of Reed Elementary in Holdenville. Green squares represent students who have scored proficient on their benchmark reading tests.

Students at Wewoka Elementary walk back to their classrooms after meeting in small groups for ROAR, the school’s innovative reading intervention program.

Student Wade Kiser uses flash cards to work with consonant blends in his reading intervention group in the library at Wewoka Elementary.