Abbreviated Choice Directory - List of Forms and Examples only 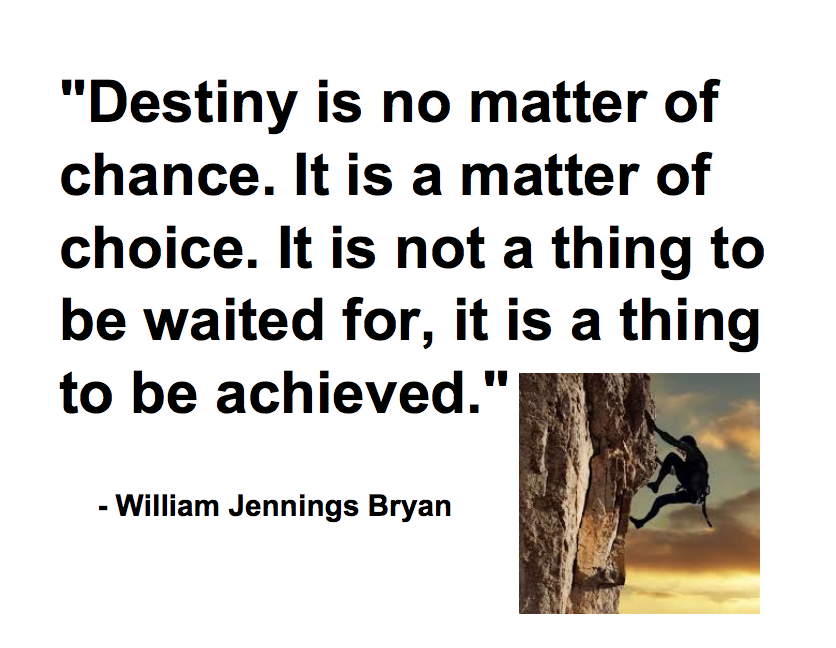 The 'Why' For Choice Education & Testimonial Of Effectiveness

The ‘WHY?’ For Choice Education! - YES! MAKING CHOICES CAN BE TAUGHT! 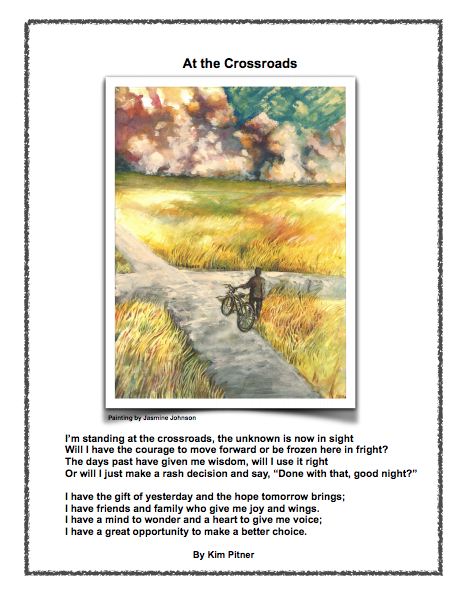 “This C.R.O.S.S.ROADS CHOICE process was birthed from incredible frustration at having to handle one situation after another as a result of negative choices by the students at the middle school where I was principal. I asked the question, “Can making better choices be taught?” and discovered that, YES, IT CAN!”

“More importantly all of a sudden it was the students resolving the potential conflicts and not the staff. The role of the staff had switched from that of disciplinarians to facilitators of self-discipline by the students.”

“The change in the dynamics of the potential conflict situation was dramatic from the traditional teacher intervention to students empowered to solve the problem themselves.”

1) The student felt safe enough to bring the problem to an adult knowing they would be allowed to work it out between themselves.

2) The students evaluated their own behavior/choices.

3) The students determined what consequences would be fair. (with a few hints from me)

Who were the winners here? Who learned to take responsibility for their own actions? Who worked out other ways the problem could be solved? Who was not angry because of consequences handed down by ‘that teacher’ (or other person in authority)? Who has a better chance of making different choices in the future?

“We are a product of the choices we make, not the circumstances that we face.” -Roger Crawford

Making good choices can be taught! Learn how using this simple five step process. With consistent use it leads to positive, productive decisions in all these areas:

There five steps in the C.R.O.S.S.ROADS process are:

IMPORTANT: The five steps are an easy quick verbal process to use in any situation. Once learned and used consistently, it can take just minutes to apply to any choice being made or used more in depth for collaborative decision-making. There are worksheets for more formal use or documentation. 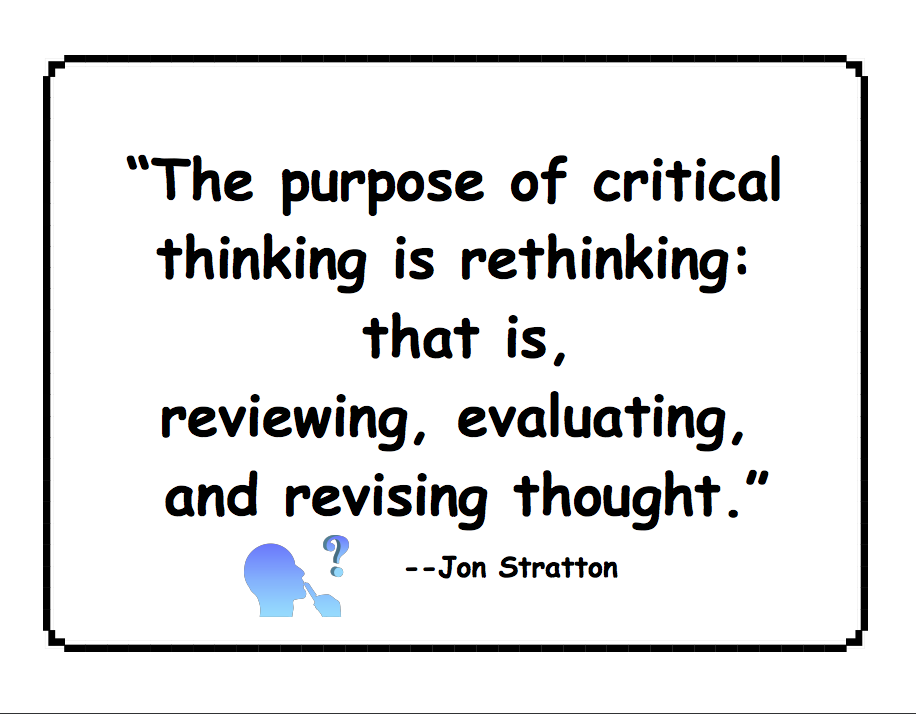 “The purpose of critical thinking is rethinking: that is, reviewing, evaluating, and revising thought.”
-- Jon Stratton 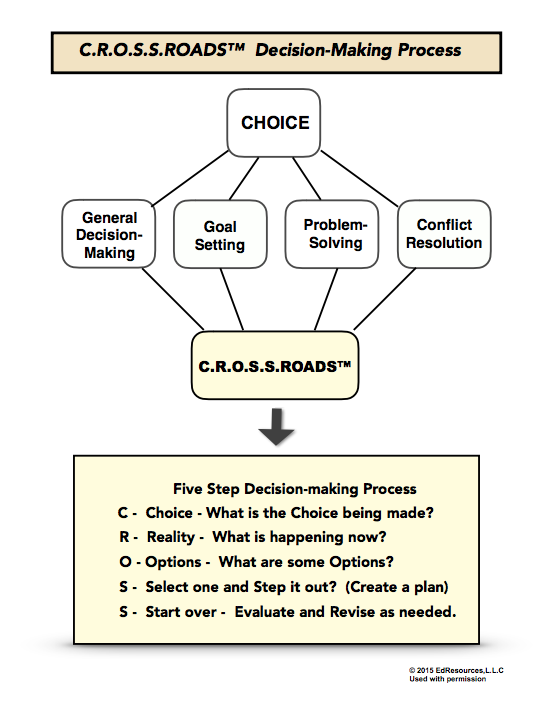 HOW TO INTRODUCE THE C.R.O.S.S.ROADS PROCESS:

*** Documents contain links to printable reference tools for ease of implementation. These may be used on your digital devices for whole group or individual display.

1) Use literature such as:

2) Any piece of fictional literature may be analyzed with C.R.O.S.S.ROADS five steps. All of the Life Principles have literature lessons applying the process.

4) It is suggested to begin with multiple class decision situations to gain experience with the process. Identify a situation in the classroom or elsewhere in the school environment and guide the students through the process:

b) Individual Goal setting - EX 1 - A student in Ms. Brown’s class setting own goal for lining up and following hallway procedures

***Both these examples use the C.R.O.S.S.ROADS Simplified Goal Setting Worksheet

***Further examples are given under each category of decision-making.

5) Use the C.R.O.S.S.ROADS process to analyze Desert Pete’s choices in the song, Desert Pete song by the Kingston Trio - 2:43 min. - Desert Pete Lyrics

6) Use portions of a Creed , the Life Principles, Eight Expectations, or quotes as a springboard for discussion and application of the process.
These resource links contain literature lessons, quotes, etc.

7) Class Activity: As situations come up, verbally use the process to make group decisions. i.e. how to make organized group transitions

(Option:Put Simplified or Basic form on digital display and work together as a group.)

The following tools are provided to assist in teaching how to make better choices through visualizing, training, applying, and documenting progress using the C.R.O.S.S.ROADS process.

Documents contain links to printable reference tools for ease of implementation. These may be used on your digital devices for whole group or individual display. 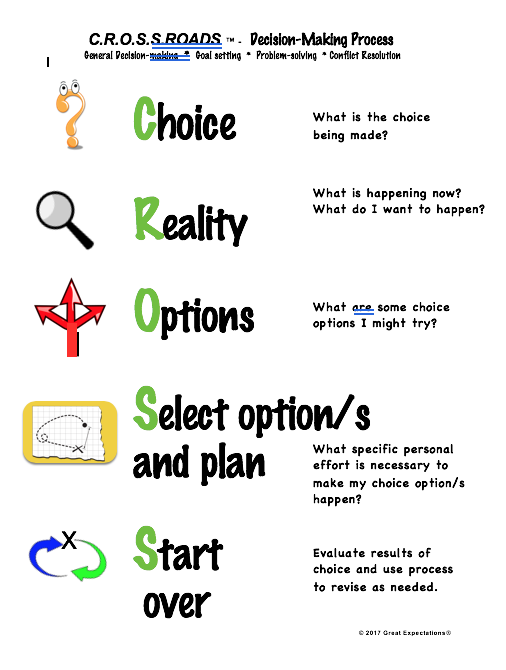 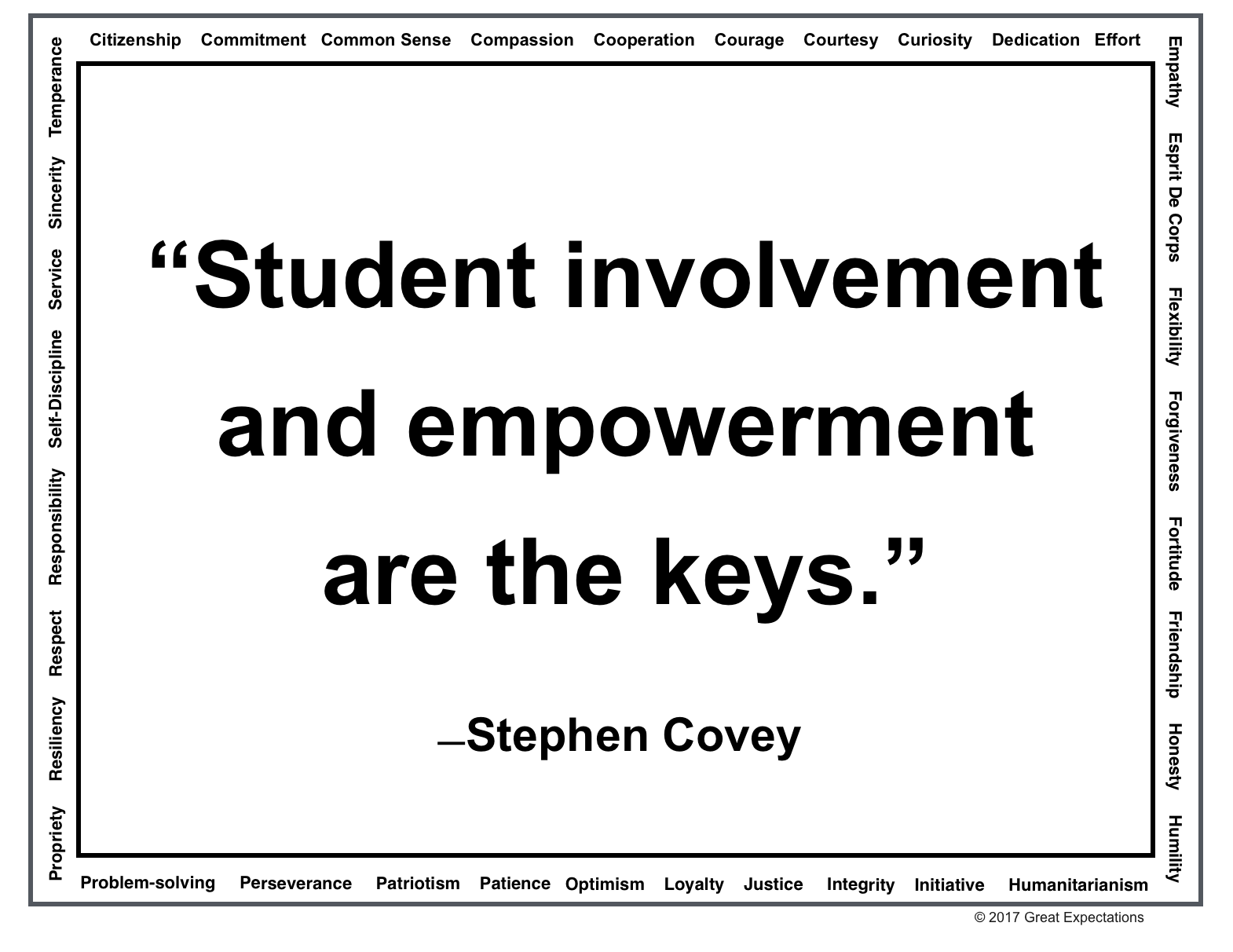 “Student involvement and empowerment are the keys.”
Stephen Covey 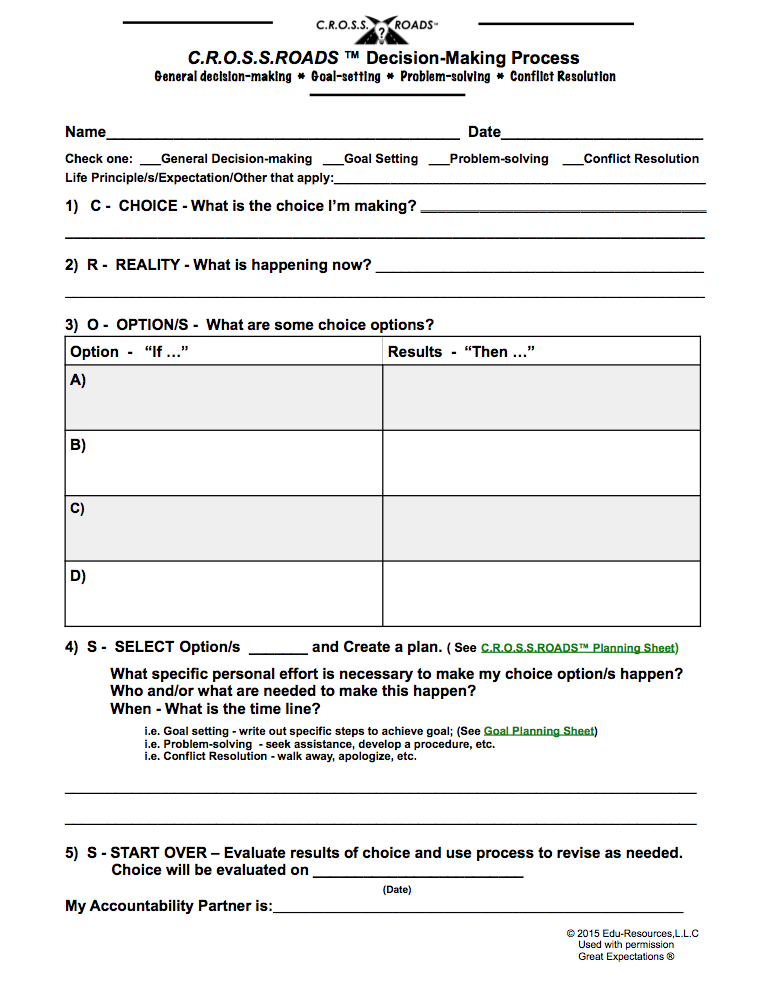 *** When using the Crossroads process, refer to any applicable portion of the Creed , Life Principles, Eight Expectations, or quotes that apply. These resources contain lesson plans, literature, music, activities, etc.

General Decision-making Examples: The process applies to ANY general decision from “Do I eat out tonight?” to “What will my Professional Learning Focus goal be this year?”

School Dialogue Scripts using the C.R.O.S.S.ROADS process - two scripts of actual situations that model the verbal use of the five steps.

We cannot afford to sit by idly and hope that they pick up on their own how to resolve conflicts, how to be more responsible. We have done that for years and the approach is just not working. We must show them the upward path.”
--Stephen Covey

“ A problem is a chance for you to do your best.”
--Duke Ellington

Goal Setting with C.R.O.S.S.ROADS has its own set of forms and examples. 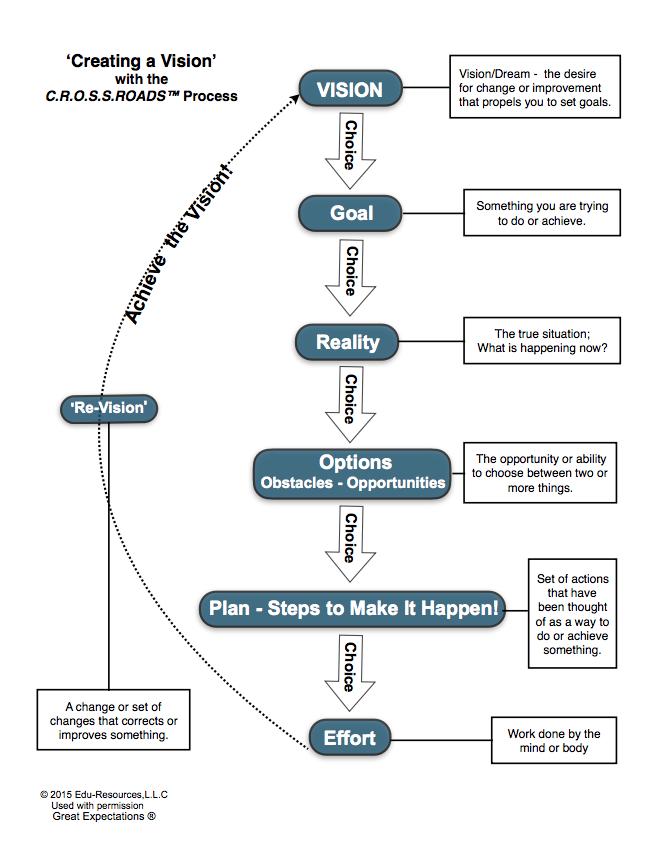 We cannot stand by and wait for the to become CEO’s or school teachers or parents before we teach them how to organize their lives, to set goals,or to be assertive. 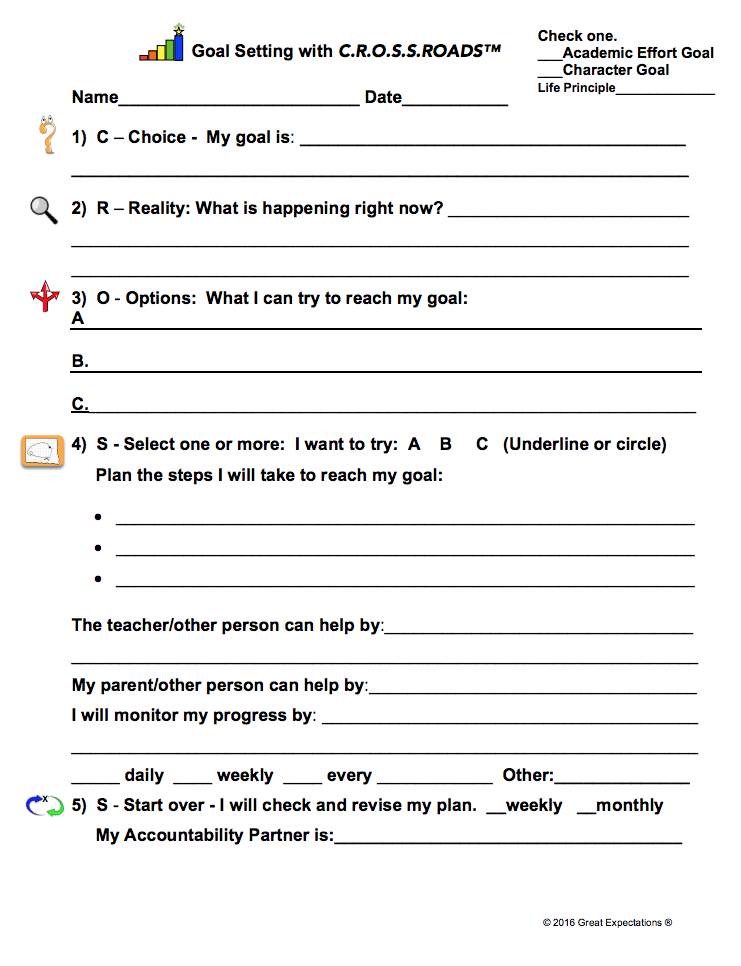 Each of the completed online 17 Practices has a set of educator goal setting examples specifically designed for the implementation of that practice using the C.R.O.S.S.ROADS process. 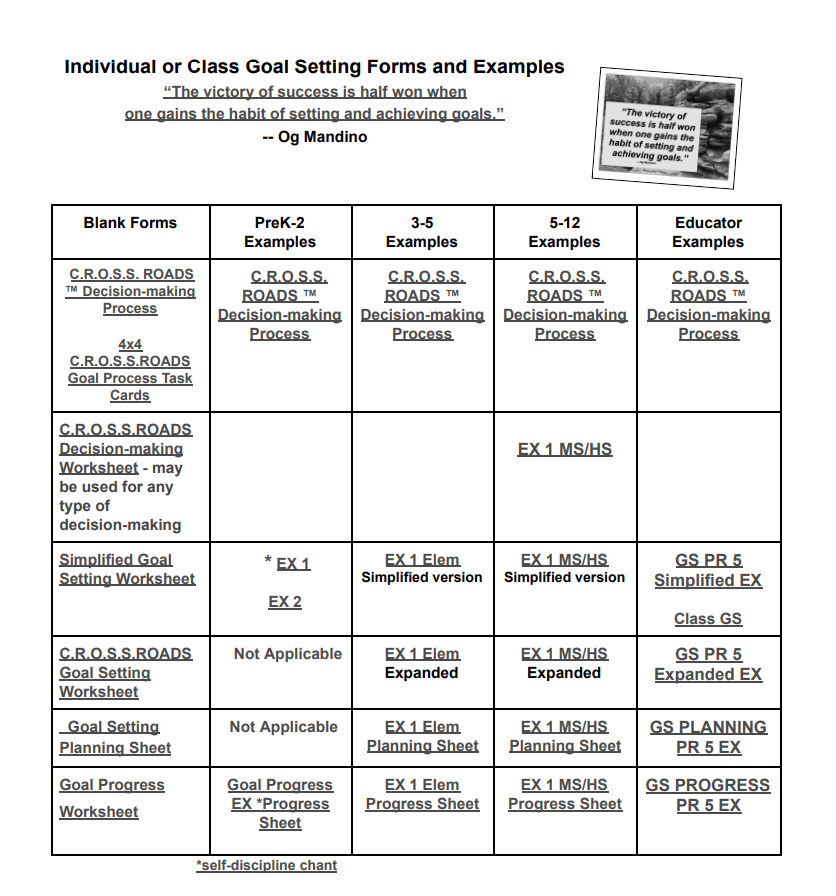 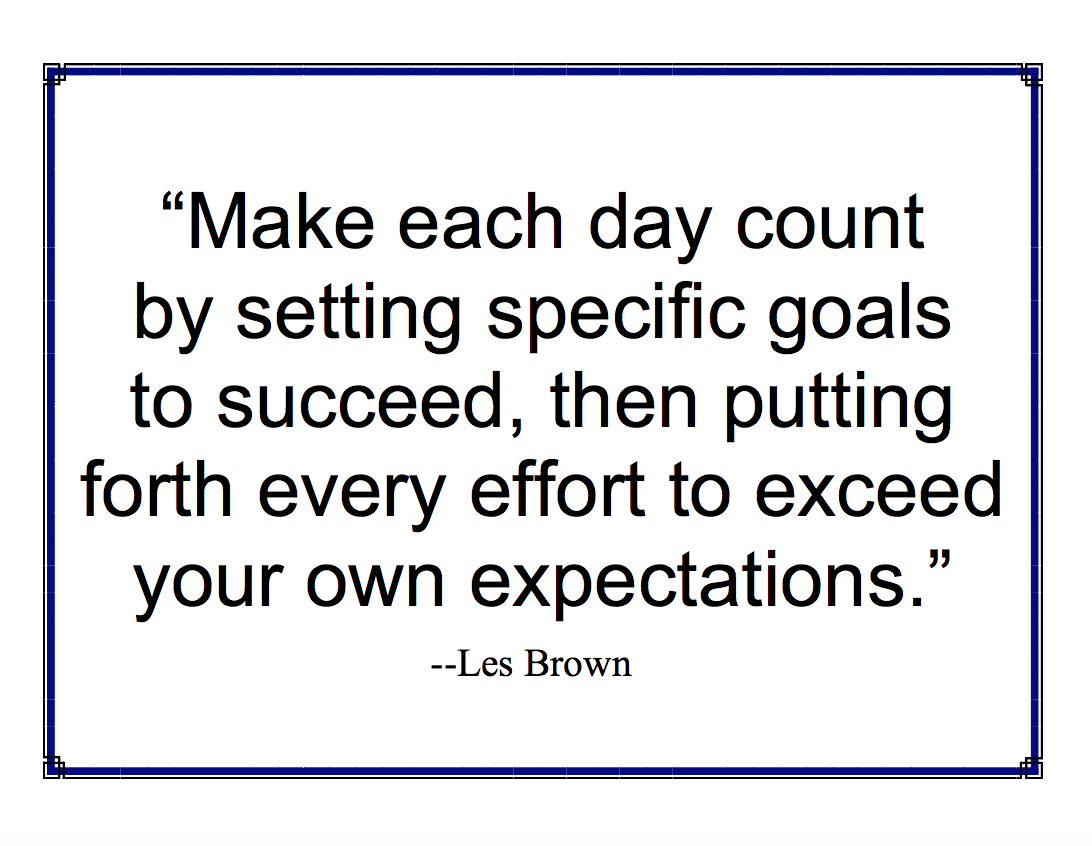 “Make each day count by setting specific goals to succeed, then putting forth every effort to exceed your own expectations.”
- Les Brown