Skip to content
By Mike Friedel of the Claremore Daily Progress 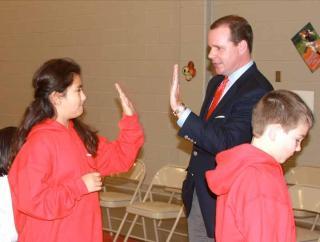 Lt. Gov. Todd Lamb made a stop at Catalayah Elementary Wednesday morning for the student-led “Rise and Shine” ceremony.
Pelco Structural President Phil Albert, Claremore Superintendent Mike McClaren, Claremore Public Schools Foundation Executive Director Marla Lillie and Catalayah Principal Kellye Shuck were also in attendance, as Lamb offered a few words of advice to students.
Lamb emphasized the idea of students staying in Oklahoma after they graduate high school.
“Don’t ever leave Oklahoma. Whatever you want to do, whether you want to be a cowboy, astronaut, lawyer, teacher, nurse, you can do it in Oklahoma,” he said. “We have the best state in the entire nation. No state works harder, is more successful or helps more people than the state of Oklahoma.”
The “Rise and Shine” ceremony included “God Bless America,” sung by Catalayah second-grade students, followed by a poem “A Great Somebody,” written by Adrienne Sealy Hardesty and recited by third-grade students. The  poem focuses on hard work and positivity in the classroom and in life.
Catalayah Elementary gained Great Expectations status last year. Lamb said he loves Great Expectation schools because they are the best.
“Great Expectations is a big program with great curriculum. Everything that was recited this morning in ‘Rise and Shine,’ we ought to require everybody that works at the State Capitol to recite the same each morning.”
Before his address to the students, Lamb invited Albert to stand as students, teachers and faculty applauded Pelco Structural, LLC for their dedication to Catalayah and voluntary support of education and the community.
Pelco Structural accepted an invititation from Shuck at the beginning of the school year to be Catalayah’s partner in education. So far this year, Pelco has provided classrooms with school supplies, purchased wristbands for students to wear during drug-free week and birthday cakes for staff  members each month.
Pelco has also purchased red, white and blue hoodies and kazoos for Catalayah students’ participation in the Claremore Veterans Day Parade on Monday. The classes sported the sweatshirts during a kazoo performance of “Yankee Doodle Dandy” Wednesday.
Lamb said he was told by McClaren that Catalayah was the Cherokee word for “valley.”
“You know what happens in a valley? Water is collected to sustain life and the grass grows,” he said. “Success happens in a valley and that is what is happening at Catalayah. I am very impressed, and very grateful that I got to be a part of this presentation.”
Posted in News
Scroll To Top