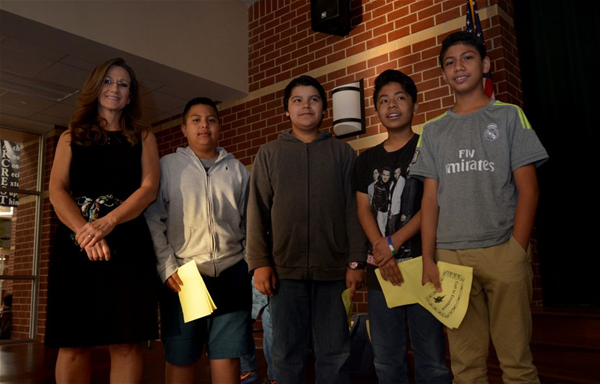 The Tomball Independent School District has launched a pilot program in two of the district’s newest schools that is aimed at building character development of students and promoting academic excellence in the classroom.

The program, known as Great Expectations, employs basic tenets, life principles and practices that are designed to build self-esteem among students and foster a climate of mutual respect and high expectations in the classroom, said Martha Salazar-Zamora, Tomball ISD’s chief academic officer, who introduced the program to Tomball ISD last year.

The Oklahoma-based program was founded in 1991 by retired financial planner Charlie Hollar and was envisioned as a foundational program dedicated to developing a teacher training model.

Salazar-Zamora took part in the program several years ago when it was being used in Houston ISD and Spring ISD and saw the program as a valuable tool that could help teachers and students be successful.

“I believe in this very strongly,” she said. “A campus needs to find what’s best for them. What I am proudest of is that we had two principals who were opening (new) campuses and wanted to build a culture with Great Expectations.”

The program was introduced in Tomball ISD last year when Salazar-Zamora took administrators on a fieldtrip to Spring ISD, which used the program until the start of the 2015-16 school year.

Salazar-Zamora said she hopes the program can be expanded to three more schools for the 2016-17 school year.

“The board has been very supportive of this program,” she said. “It’s key that the campus leadership embraces (the program) and wants this.”

Students at Oakcrest Intermediate begin their days on campus with a school-wide assembly to reinforce the eight expectations, which include: valuing one another, using good manners, cheering the successes of their peers, recognizing a good effort, offering encouragement, practicing virtuous living, and refraining from using sarcasm to make light of a mistake.

The morning assemblies, which are student-led, also focus each week on one of the 36 core life principles of the program.

“This kind of gets everyone on the same mindset…,” said Oakcrest Intermediate Principal Lee Wright.

When he does get on the microphone and speak to his students, Wright says his goal is always to remind them of their potential.

The morning assemblies have taken the place of the traditional morning announcements broadcast over the school public address system, but still include the Pledge of Allegiance and the minute of silence.

During a recent assembly, the students from Vivian Rogers’ sixth-grade science class led the morning assembly and focused on the subject of courage and what it means to have the strength to act, even when they are afraid or uncertain.

Eric Orosco, Jose Juarez, Caesar Martinez and Noel Mayo, who led one of the morning assemblies, said the program has helped them at school and at home.

“You challenge yourself to help others, and to do more in class,” Martinez said. “It feels good.”

Tori Cates, who teaches fifth-grade math at Oakcrest Intermediate, began her teaching career in Oklahoma four years ago and experienced the Great Expectations program while working at a model school.

Cates said she was overjoyed at having the program at a campus in Tomball ISD.

“I think the kids are more intentional (with the program), making sure they are following the life principles and showing respect,” she said. “These are principles that are not just going to benefit you here in school, but outside of school in the grocery store, with your family. These are life principles.”