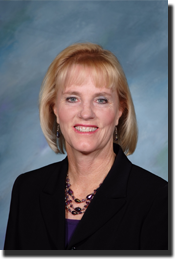 Dr. Marilyn Denison graduated from the University of New Mexico in 1981 with a Bachelor of Science degree in Elementary Education. She went on to pursue a Masters degree in Counseling and Educational Administration from East Central University in Oklahoma. From there, she earned her Doctoral degree in Educational Leadership from Sam Houston State University in 2006. Dr. Denison began her career as a teacher in Oklahoma, she later became an assistant principal and principal at various elementary campuses in Oklahoma and Texas. As a transformational leader, Dr. Denison opened Ginger McNabb Elementary School, a Great Expectations Model school, in Spring, Texas. She later served as the Executive Director of Elementary Education in Spring ISD. In addition to her leadership in the school district, she was an Adjunct Professor at Sam Houston State University and St. Thomas University teaching Educational Leadership, Counseling and Curriculum Planning. Dr. Denison joined Coppell ISD in 2011 as the Assistant Superintendent for Curriculum and Instruction. Since joining the curriculum team in Coppell ISD, Dr. Denison has led the development of a transformational Learning Framework based upon TASA’s Creating a New Vision for Public Education in Texas. Dr. Denison has served as a Great Expectations instructor for 13 years. Through her leadership, she was instrumental in bringing GE to the Spring, Texas and Coppell, Texas school districts, where many campuses have earned Model School Status.