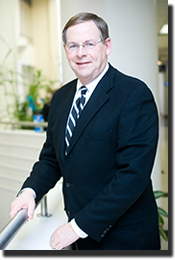 Joe Williams serves as the President of the Oklahoma region of The Signatry – A Global Christian Foundation and as an elder at Henderson Hills Baptist Church in Edmond, OK. Williams was a community banker for over 33 years, serving most of those years as Bank President and CEO. Raised on a diversified farming operation in Western Oklahoma, Joe graduated from Oklahoma State University and the Graduate School of Banking at the University of Wisconsin.

Williams has served on the boards of, and in significant leadership positions with, Ministries of Jesus, Inc., a Christian health clinic in Edmond, OK, the El Reno (OK) City Council, Leadership Oklahoma, The Bankers Bank of Oklahoma, Oklahoma State Chamber of Commerce, the Oklahoma Academy, the Oklahoma Bankers Association and the American Bankers Association. Joe has served as board member of Great Expectations since the beginning years in the early 1990s. He and his wife Susie have been married for 47 years. They have two grown daughters and six grandchildren.