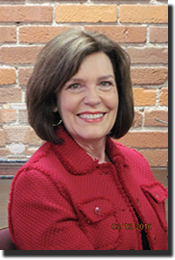 Julie Knutson is a native Oklahoman, born and raised in Tulsa. Julie has lived in Norman since 1979. She received her Bachelor of Science degree in education (emphasis English, Drama & Debate) and her Master of Arts degree in Counseling Psychology from The University of Tulsa. She is the President and CEO of the Oklahoma Academy for State Goals (The Oklahoma Academy), a private nonprofit statewide membership organization addressing the major public policy issues facing the state. She has been CEO since 1987.

Julie has been an educator focusing her teaching in the areas of English, Speech Communications/ Debate, and Psychology. She taught at Cascia Hall College Preparatory School in Tulsa from 1973 through 1979. Her counseling psychology degree along with administrative certification led her to work as a teacher, school counselor, assistant principal and director of counseling for the Norman Public Schools, and an adjunct professor at the University of Oklahoma from 1979 through 1987.

Julie has been and continues to be very active in several organizations. She is Chairman of the Certified Healthy Businesses Committee within Oklahoma Turning Point, and serves on the workgroup committee for Certified Healthy Communities. She currently serves on the UCO President’s Advisory Council. She is an advisory member of N.E.W. Leadership for Women with the Carl Albert Center, and is a member of the Norman Chamber, the Greater OKC Chamber, and the Tulsa Regional Chamber. She is a member of the Board of Directors of Great Expectations, an education program used by many public schools across the state, and in Texas and Missouri. She helped found Great Expectations in the early 1990s. She is also a member of the Creative Oklahoma board. She volunteers her time with tutoring children in reading, and for the Festival of the Arts in Oklahoma City. The Journal Record selected her as one of the top 50 Corporate Women in Oklahoma in 1997 and again in 2006. She earned recognition as one of Oklahoma’s Most Admired CEO’s in February 2011.

Past board and organization involvement includes having been a board member of The State Chamber of Oklahoma; President of the Oklahoma Counseling Association; Chairman of the Midwest Region of the American Counseling Association; and Chairman of the National Licensure Committee for the American Counseling Association. She served on the State Department of Education task force on Middle Level Education Development. She was an advisory member for Southern Growth Policies Board and served on the Council on Communities in the South. She was selected a member of Leadership Oklahoma Class II, and subsequently served on their board of directors for three years. She was also selected a member of Leadership Oklahoma City Class XV, and served three years on their board. She served on the board for LINK Norman, the Myriad Gardens, the board of advocates for the OU College of Education, and an advisory board member for the Oklahoma Commission on Children and Youth.

She is certified in scenario thinking and planning and conducts seminars and workshops with private and public groups utilizing a scenario thinking approach to strategic planning. She also has conducted several workshops on leadership skills, effective communication, decision-making, goal setting, and government relations.

Julie is married to Craig Knutson, with Growing Global LLC. They reside in Norman. They have three children, two granddaughters (ages 12 and 7), and a 3-year old grandson!