by Kristy Sturgill of The Claremore Progress Daily 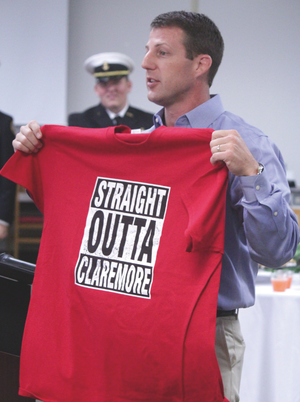 “I can really tell you love it here and you love your teachers.”

Mullin first shared his life story and his personal path to becoming a congressman.

Mullin said he was told he would never be able to play sports or be athletic because of medical problems he was born with, but decided in sixth grade he would go to college on a wrestling scholarship. When he set the goal, his dad transferred him to a school with a wrestling program. Over the course of two years, Mullin attended four different schools because of the cancellation of wresting programs.

“I had to overcome everything, which is fine and I did it, because I said something back in sixth grade and that is, ‘I am going to go to college on a wrestling scholarship,” he said.

After six years of training and preparing for college, a sports injury ruined his hope of attending college on an athletic scholarship.

“I had an excuse to give up, but I still had a goal. Life is tough. No one said it was going to be fair, but if you get in a habit of quitting it is contagious — it is an infection,” said Mullin. “This is the group above all groups. You are gifted, but you are only so gifted as you are willing to use it.”

After sharing his story, he answered several questions from the high school students, and asked the students to introduce themselves by sharing what major they plan to pursue and which college they hope to attend.

The students asked Mullin both personal and political questions.  He said no question would be off-limits.

“We have these two clubs (Young Democrats and Young Republicans) with two different ideas, and they go head-to-head with these conflicting ideas. Neither of them can do anything, and their idea, which they could have done together, fizzles out. How is it that you manage to get compromise when you have two different ideas? How do you get cooperation?” asked CHS senior Dalton Nolan.

Mullin told Nolan the first thing to do is identify who in the group wants to get something done.

“What we do is write down what we have in common. What you realize is a lot of people have a lot of things in common, and have the same ultimate goal in mind. They just disagree how to get there,” Mullin said.

The group also asked Mullin questions about his decision to pursue political office, what he likes most about being a legislator, the challenges and difficulties he faces as a congressman, and his thoughts on legislation regarding same-sex marriage and the legal rights of same-sex couples.