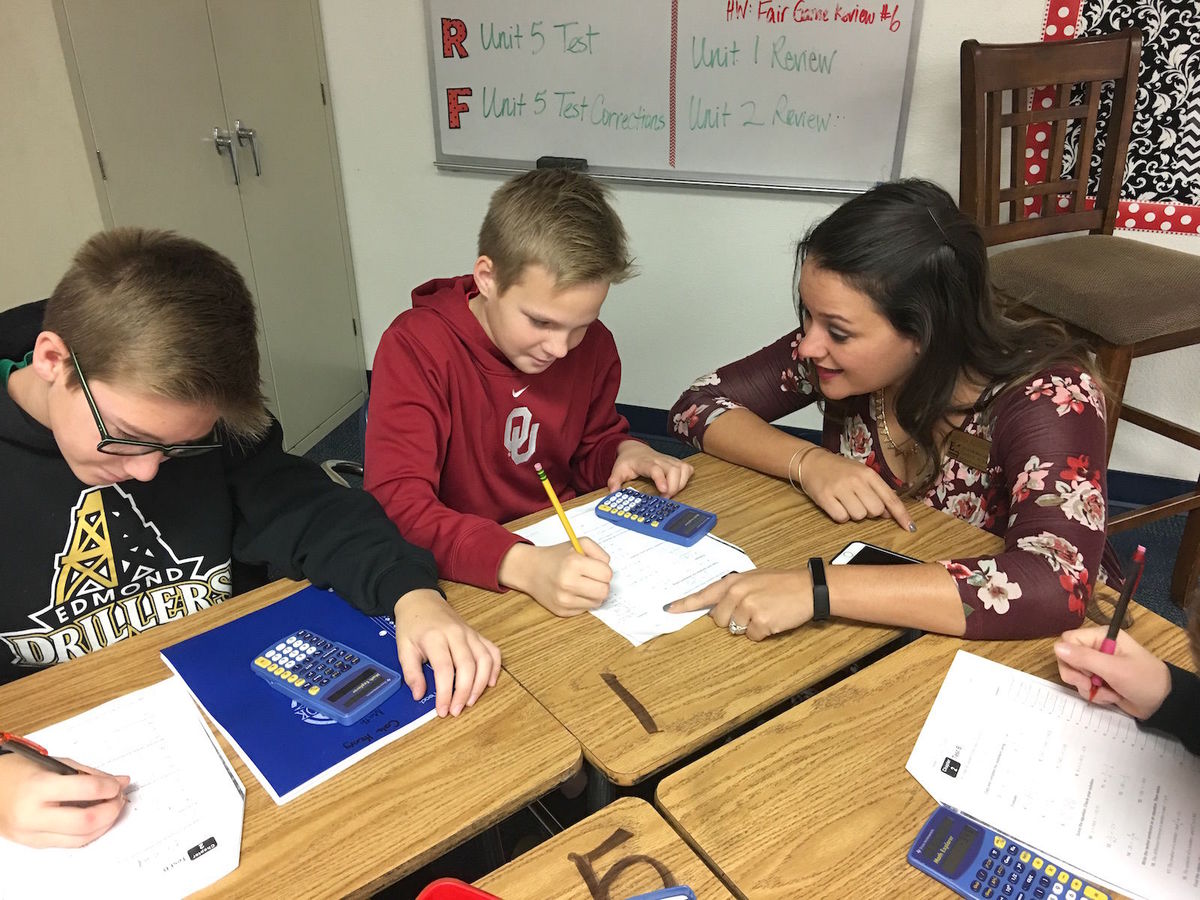 Cheyenne Middle School’s 2017 Teacher of the Year said she has known from a very early age that she would be a teacher.

Sixth grade mathematics teacher Chelsea Blackburn has been at Cheyenne for three years and prior to that she spent six years at Washington Irving Elementary and two years at Ida Freeman Elementary teaching fourth grade at both places.

Blackburn received her Bachelor of Elementary Education and her Master of Education Administration from the University of Central Oklahoma.

When her family moved to Edmond in 2003 she began her student teaching at Ida Freeman, and she was hired the following school year to teach fourth grade.

Each day her class begins with a spiraling bell work problem meant to review or reinforce past content.

“Next, we go over our current math topic,” Blackburn said, “and I try to make lessons as interactive as possible.”

Blackburn added that her students are often times working collaboratively, engaged in a hands on activity or up out of their seats to complete a task.

“Middle school students need to communicate what they are learning to learn best — so I attempt to engage them in conversation with me or their peers as frequently as possible.”

Blackburn said at a very early age she knew she would be a teacher.

“I had amazing teachers as a student who inspired me to want to give back in the same way they had given to me,” Blackburn said. “Teaching is the profession that influences all other professions. I get excited at the thought that I am preparing students for jobs that don't even exist yet. The ability to influence the potential within children is something I don’t take lightly.”

“Mr. Schilb had the ability to engage me at a time in my life when history was not a passion. Not only did Mr. Schilb find a way to get me excited and engaged in history, but also he took the time to forge a personal relationship with all of his students,” Blackburn added. “In college, while looking back on the class, I soon realized that the relationship we built was the prime motivator for me to succeed in his classroom. I strive to mirror Mr. Schilb in my passion, engagement and relationship with students.”

Blackburn said middle school is such a pivotal age.

“There is a lot of change that happens to a middle schooler and these students need to feel respected, heard and supported,” Blackburn said.

She said math and science are driving the technology work force.

“Building strong math students, with the ability to problem solve and think critically, is a vital skill students need when they leave high school,” Blackburn said. “Making students feel capable and knowledgeable in sixth grade math sets them up for success in future math classes.”

The opportunities given to a student through an education are endless, Blackburn added.

“Helping students to develop their potential and future dreams is a huge part of my job. Above all, inspiring positive attitudes in my students is what will truly set them up for success,” Blackburn said.

In addition to teaching mathematics, Blackburn said she hopes to teach her students common courtesy, kindness, compassion, and respect.

When asked what had she learned from her students, Blackburn added, “Wow — so many lessons!  Expect the unexpected, seize every moment, never say no to a hug (you never know how bad they need it), embrace embarrassing moments, smile every day, and don't be afraid to admit you as the adult made a mistake.”

Blackburn’s philosophy of education includes her belief that a teacher’s role in the classroom is to inspire, engage, listen and uplift.

“Above all, we need to create a thirst and model a love for learning. Lessons should be integrated, related to the real world, and connected to other subjects,” Blackburn said. “Critical thinking and rigor should be interwoven into the process so that all students are exposed and challenged. Above all, I feel that the teacher needs to hold the belief that all students can succeed and learn, and that is their responsibility to ensure that that happens.”

Blackburn is a certified instructor for Great Expectations Education Foundation.

“I spend my summers traveling the country and training teachers in their ability to engage and improve classroom climate and instruction. This past summer I worked with over 300 educators in Houston, Dallas, Edmond, Michigan and South Carolina.”

She and her husband, Brandon Blackburn, met through Match.com and have been married for almost two years. Of the online dating site, she said, “It really works.” Chelsea added, “We lived only two miles apart here in Edmond and had our first date at Upper Crust.”

They have two four-legged children: a dog, Shooter, and a cat, Pixie.

“In my spare time I enjoy spending time with my family and friends,” Chelsea said. “I enjoy hosting gatherings or going out to eat around the OKC metro, and I enjoy vacationing to the mountains and to Grand Lake during the summer.”