Choice is foundational to a personal investment by shareholders - educators, learners, parents, and supporters. It serves as the integral link between general decision-making, goal setting, problem-solving and conflict resolution. The decision-making process motivates, challenges, and inspires.

Addressing the concept of choice, the C.R.O.S.S.ROADS™ decision-making process is a tool that:

1) Puts responsibility in the hands of the individual.

2) Guides an individual through five steps towards making thoughtful

The C.R.O.S.S.ROADS™ choice process detailed here may be used for general decision-making, goal setting, conflict resolution, and problem-solving. It was originally created, just as Glasser advised, for use as a tool to help students make better choices in conflict resolution and problem-solving situations in a school setting. It was so successful that there was a 56% reduction in disciplinary referrals over a 2 year period. Added as a strategy after the implementation of Great Expectations in a second school setting, disciplinary referrals became all but non-existent. The students became the problem-solvers. 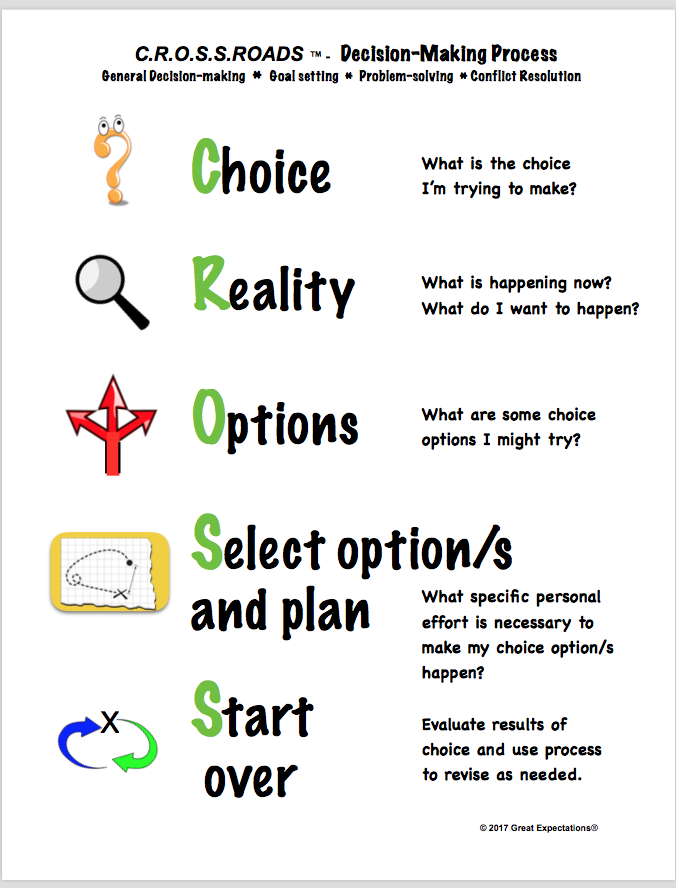 O - Options: What are some choice options I might try?

What options have I tried so far?

What are the benefits/pitfalls of these options?

What specific personal effort is necessary to make my choice

In an educational setting the process may be put together with a school creed, the Eight Expectations, and Life Principles to form the guidelines for making positive choices.